Metro signs next to the Red Square in Moscow

The Moscow Metro is probably the most magnificent subway of the world. It is not only beautiful, but also cheap, reliable and runs on time. In Moscow the Metro is often the fastest way to get around the city compared to other means of public transportation, taxis or driving. During rush hours, metro trains run every one to two minutes.

The Moscow Metro carries about 7 million passengers a day. That is why the trains and metro stations are very crowded especially on weekdays. The best time for a sightseeing tour in the Metro is early morning, late evening or Sunday.

The Moscow Metro is smoke free. It is also prohibited the consume of alcohol.
Bicycles are not allowed in the Metro, except for folding bicycles and kids’ bikes.

Taking photos or filming in the Moscow Metro is permitted without using special equipment such as tripods, lights, etc.

Hours of operation of the Moscow Metro 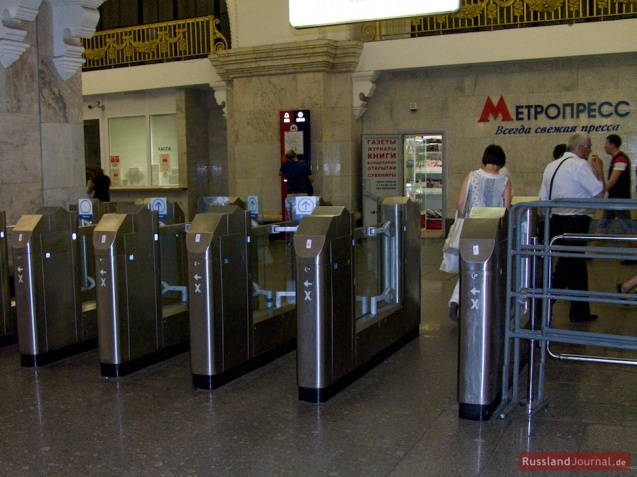 Turnstiles of the Moscow Metro

It is not possible to enter the Moscow Metro without a valid ticket. To get in, one has to insert the ticket into a turnstile. The rides are paid for with electronic or paper cards. Tickets can be purchased at Metro ticket offices or at vending machines. The choice of a ticket depends on how often you want to travel by the Moscow Metro. The following cards allow to use all means of public transportation in Moscow: metro, bus, trolleybus, tram and the monorail road.
Exchange Rate Ruble / Euro / Dollar

The best fare for a single ride offers the ticket called "Wallet" (Russian: Кошелёк) on the smart card Troika (Russian: карта "Тройка"): 38 rubles (ca. 0,57 USD) in the Metro and the monorail road.

Children under 7 years of age travel for free.
The fare for one piece of luggage is 60 rubles.
Prices as of February 2019

Getting around in the Moscow Metro 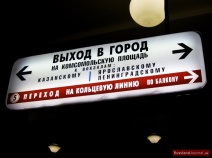 An overhead sign in the Moscow Metro. ВЫХОД В ГОРОД means in Russian "Exit to the city".

The names of metro stations are written in Cyrillic and in Latin letters which makes is easier for millions of foreign tourists to find the way. Metro signs that give directions are only in Russian, though. So it might be helpful to learn the Russian Alphabet before going to Moscow.
Vocabulary list: In the Metro

Each metro line is has a number (1 to 12) and a different color.

Transfer stations can be easily recognised on the Metro map. When changing lines, the main difficulty is that transfer stations of different lines have different names. So it is important to know the right station.

Map of the Moscow Metro 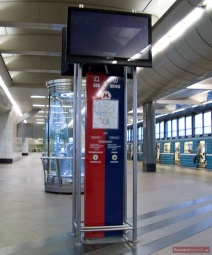 Emergency-Information-Point in the Moscow Metro

Safety in the Moscow Metro

All metro stations are equipped with red/blue Emergency-Information-Points with two buttons. The emergency button is located on the red side and the information button on the blue one.

There are video surveillance cameras and alarm systems in all stations and passages of the Metro.

The Moscow Metro is also being equipped with metal detectors.

Beautiful Stations of the Moscow Metro 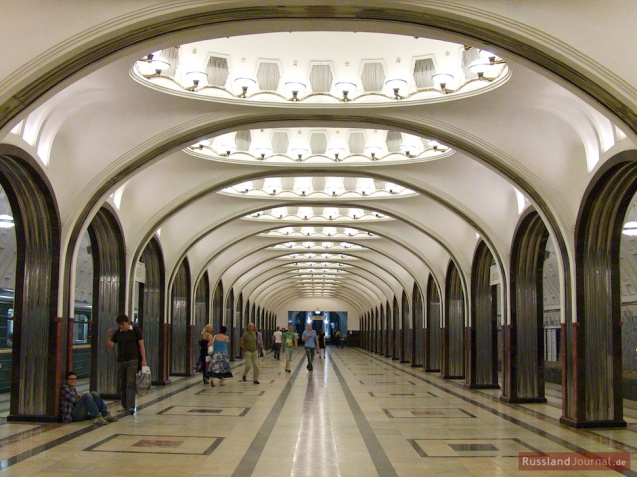 The hall of Mayakovskaya Metro Station

This elegant station impresses with its simple columns made of marble and stainless steel. Cupola mosaics show the achievements of the soviet aviation. The station was named after the Russian poet Vladimir Mayakovsky (1893-1930). As the German Army approached Moscow in 1941, Stalin held a speech here addressing the Supreme Soviet before sending Russian troops to the front. 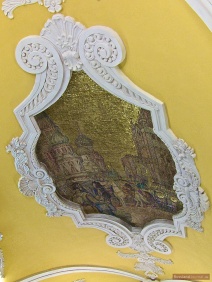 This monumental station has many different platforms and one of the longest escalators of the Moscow Metro -  80 meters. The Ring line station is decorated with eight gold mosaics, huge chandeliers and marble columns. 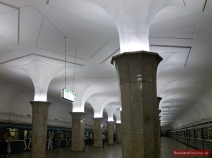 The hall of Kropotkinskaya Metro Station

Everything in Kropotkinskaya station seems to be in harmony:  the simple structure of the columns, pink-grey  granite floor, pale marble walls and indirect lights. 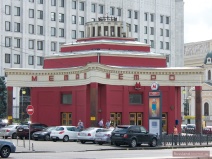 Arbatskaya station of the Filyovskaya line is worth seeing from the outside. The entrance pavilion has the shape of the Soviet star. Although it would be better to see it from above, one can still recognize the shape looking at the pavilion at a distance. 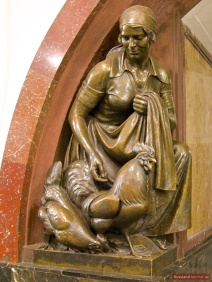 One of the statues of Ploshchad Revolyutsii Metro Station

The main attraction of this station of the Moscow Metro are life-size bronze statues arranged in pairs under marble covered arches. They represent people who contributed to the success of the Soviet Union. Among them are workers, soldiers, sailors, sportsmen, a mother with an infant or a girl reading a book. 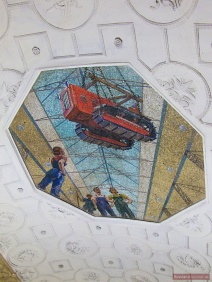 This metro station is dedicated to the heroes of the Red Army. Along the walls one can see scenes from the Second World War. There are torch-like lamps in the middle of the hall. 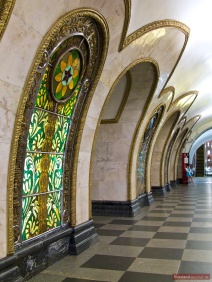 Eye-catchers of this rather beautiful metro station are stained glass panels with motives of Russian tapestry. The glass panels are backlit and resemble church windows with daylight gleaming through. 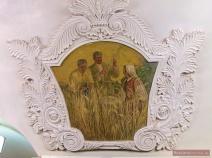 The main theme of this station is the friendship between Russia and Ukraine. One can easily recognize it just looking at its mosaics. Marble covered walls, ornaments and golden chandeliers give Kievskaya station a touch of glamour.

History of the Moscow Metro

Discussions about building an underground railway in Moscow started in 1902. Back then, most people were shocked and the issue caused considerable dispute in the media.

In the early 1930s the population of Moscow grew rapidly. So it was decided to assign two important communist leaders to manage the construction of the Moscow Metro: Lasar Kaganovitch, the then-Minister of Transport of the USSR, and Nikita Khrushchev, who later became General Secretary of the Communist Party of the Soviet Union.

Construction works started on November 7, 1931, the October Revolution Day. The project turned into a matter of prestige for the entire Soviet Union. Thousands of soldiers and volunteers helped professional workers at construction sites. Best Russian artists created interior decoration of metro stations. Being in constant competition with the West, Stalin was eager to build not just another subway, but the best subway of the world. Even beneath the ground everyone should sense the power of the Soviet state. 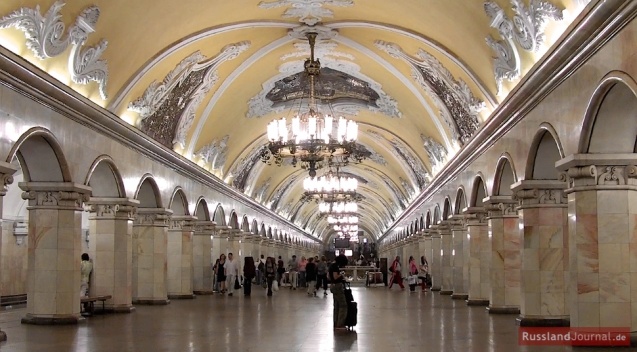 The first section of the Moscow Metro - 11 kilometres with 13 stations - was opened for operation already in May 1935. Trains ran between Park Sokolniki (Russian: Сокольники) and Park Kultury (Russian: Парк Культуры). Magnificent stations could compete with Royal palaces: huge halls were decorated with chandeliers, mosaic, statues and columns made of marble or other precious stone. Each metro station featured a different theme.

The construction of the Moscow Metro was going at a good pace. In 1939 it had already 22 stations. Construction works didn't stop even during the Second World War. At that time the Metro was also used as an air raid shelter. The station Chistiye Prudy (Russian: Чистые Пруды) was turned into General Staff Headquarters.

A modern train of the Moscow Metro

As the Moscow Metro celebrated its 70th anniversary in 2005, there were 11 lines with 170 stations in service. The metro network keeps growing. It is planned to connect suburban stations of the Moscow Metro by building a big Ring line by the year 2035.

The museum was opened in November 1967. It is situated at the metro station Sportivnaya (Russian: Спортивная) of the red line (Nr. 1), just two stops away from the ring station Park Kultury (Russian: Парк Культуры).

Opening hours:
Tuesday through Friday 9 am to 4:30 pm (last Tuesday of the month closed)
Saturday: 10 am to 4:30 pm
Last entrance 30 minutes before close. The entrance is free.