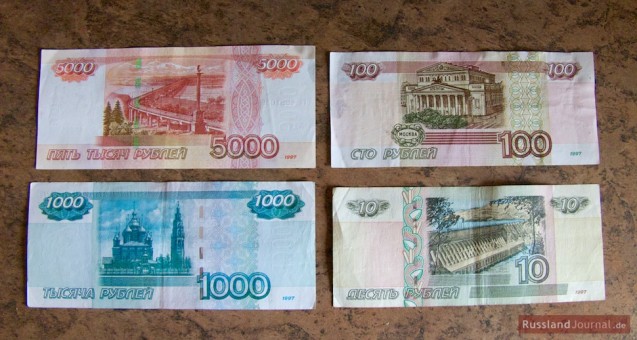 The official Russian currency is ruble (1 Ruble = 100 Kopeks). Although some prices are indicated in dollars, it is only possible to pay in rubles.

All imported foreign currency, ruble, traveller's cheques as well as internal and foreign certified securities must be declared in a written customs declaration upon arrival if their total value is in excess of 10.000 US-Dollar (or equivalent). There are no quantitative restrictions on importation of these valuables. Travellers are not forced to exchange currency directly upon arrival.

Exported cash assets (foreign currency and rubles) are subject to written declaration if their total amount exceeds 3.000 US-Dollar. It is only allowed to export more then 10.000 US-Dollar (or equivalent in ruble or other foreign currency) if the money was previously imported into Russia and stated in the written customs declaration.

It is no problem to exchange foreign currency (especially euros and US-dollars) into ruble. Only banknotes in good condition are accepted, no coins. The exchange rates in Russia are usually better then abroad. It is also possible to change ruble back into euros or US-dollars (As coins are not accepted, try spending loose change before leaving).

Foreign currency should only be exchanged in authorized banks (russ: "Банк") or in official currency exchange offices (russ: "Обмен валюты"). Never exchange money on the street and do not accept banknotes issued before 1998! To be able to make a transaction it is often necessary to show the passport. Retain all the receipts as you might have to show them at the customs.

In big cites it is also possible to withdraw money per credit card at cash points of major banks or hotels. Memorise your personal identification number (PIN) and check the credit limit!

Travellers going upcountry are advised to have enough rubles, as local cash is the best way to go here.

International credit cards (VISA, Master, American Express and Diners Club) are accepted in good hotels, restaurants and some stores. Card-holders should check with their credit card company for details on merchant acceptability and other services available. Normal Russian shops accept only ruble in cash.

Foreign visitors pay higher rates then the Russians as the prices are adjusted to Western standards. School children and students (with ID) get discounts.