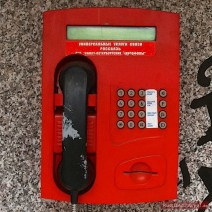 In Russia local calls are free of charge if made from a private telephone. Hotels charge for this service.

It is different with the calls to mobile/cell phones. All calls from fixed-line phones to mobile/cell phones are subject to charge. Long-distance and international calls are charged according to the tariffs of the operators providing these services. (Till July 1, 2006 mobile /cell phone owners had to pay for incoming calls. Now Russia fulfils the 'calling party pays' principle.)

In Russia there are different types of public phone booths (russ.: Таксофон) which accept tokens or phone cards sold at kiosks, post offices and metro stations. Phone booths at some hotels and airports also accept credit cards. International calls can be conducted only from modern phone booths. Cheaper off-peak rates apply on weekends and Mo.- Fr. after 10:00 PM.

For outgoing international calls dial 8-10 and the country code as shown in the examples below:

Russian major and local operators offer good coverage using GSM networks. Travellers to Russia are not required to declare mobile/cellular phones at customs upon arrival any more. According to the Federal Customs Service of the Russian Federation radio electronic devices (radio telephones, radio stations, satellite communication systems and etc.) can be imported into Russia for temporary use without any permission.

Check if your carrier has active international roaming agreements with Russian carriers. As roaming charges are usually high, it might be a good idea to ask for special holiday roaming packages.

To send a text message to Russia dial the international access code for Russia (++7) and the mobile number.

If you have problems sending a text message to Russia in spite of an existing agreement, try extending the validity of text messages to maximum time in your device settings.

Using your mobile/cell phone in Russia

Before using your mobile/cell phone in Russia, check international roaming rates of your mobile network operator. The rates can vary regionally and depend on conditions agreed upon by your operator and the Russian carrier.

It might be a good idea to check with your carrier if your phone is activated for international calling.

It is also important to make sure your phone supports frequencies used by Russian carriers. There are single-band or multi-band phones that work either on one or on more than one frequency. Some carriers offer international phone rentals.

1) Make sure there is no SIM-lock
Some carriers set a SIM-lock on their mobile/ cell phones so that the devices cannot be used with SIM cards of other carriers. This happens especially with prepaid phones. Check prior to your trip to Russia if your phone is locked. It is possible to unlock the device. In most cases the SIM-lock is deactivated automatically a year after purchase. Those who want to remove the SIM-lock usually have to pay a fee. It is also possible to get rid of the SIM-lock using special software. Russian carriers sometimes can also remove the SIM-lock.

In Russia there are local and federal mobile numbers.

For a local (direct) number one has to pay a monthly fee. The Russians buy local numbers not only because it is more convenient but also as a matter of prestige.
Tourists,who stay in Russia only for a short period of time, do not need a local number.

When buying a SIM card in Russia keep in mind the following:

In Russia there are post- and prepaid calling plans.

Postpaid calling plans require a contract with a monthly fee and provide the customer with a local (direct) number.

Prepaid calling plans provide only federal numbers. Prepaid cards can be purchased in numerous kiosks, supermarkets, banks or in the shops of different carriers.

TIP: When buying a SIM card from a Russian carrier it is recommended to bring the passport with a valid visa.