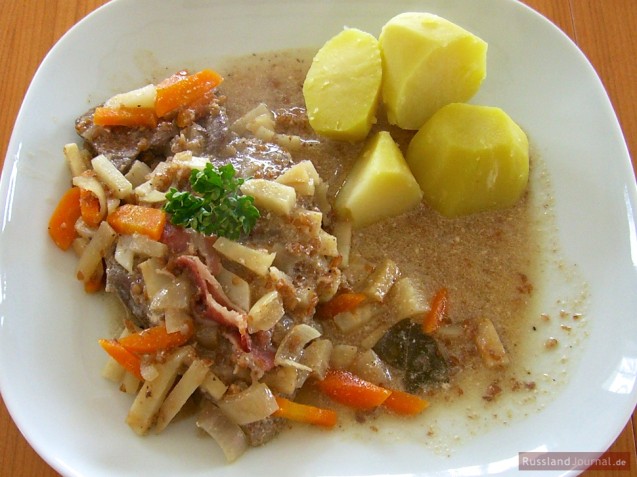 The Russian roast beef is traditionally stewed in a clay pot in the oven. It is often recommended to sear the meat first in order to get a nice crust. It makes the meat really juicy and tasty. The selection of vegetables can vary according to season and mood. In Russia, root vegetables such as carrots and celery are quite common. Whole grain rye bread used in this recipe gives the dish a special flavor. Potatoes can be served separately or braised with meat in the oven.

The following variation is especially popular in Russia on special occasions:

Prepare and serve beef stew in small clay pots. In this case cook potatoes in the pots together with the rest. In Russia, they usually take a set of clay pots with a lid with a capacity of approx. 500 ml (0,52 Quarts). This way the portions don't get too big. When choosing a clay pot, it is important to make sure that the walls are of uniform thickness and that the glaze is not damaged.

This beef stew is often cooked for different celebrations, for example for Easter.