Reviews of the Self-study Software with Apps for mobile devices

The award-winning interactive language-learning solution Rosetta Stone is, according to the manufacturer, "the fastest way to learn a language". Rosetta Stone is used by individuals and private businesses and well as by educational and government institutions in over 150 countries being especially popular in the USA. The employees of the U.S. Department of State learn foreign languages with Rosetta Stone. The secret of success seems simple: students learn a new language the way children learn their mother tongue. Rosetta Stone TOTALe offers courses for 24 languages.

We were curious if it was possible to learn Russian easily using the Rosetta Stone method and gave it a try.
Rosetta Stone TOTALe Russian includes:

Learn Russian through all senses

The Rosetta Stone method simulates a natural language-learning situation. From the very beginning, learners find themselves in a Russian speaking world. They are surrounded with Russian words, phrases and the voices of native speakers. There is no translation. So it doesn’t matter if students speak German, English, Spanish or any other language. The method can be used by all foreign language learners, irrespective of their mother tongue. It is possible to select English as the user interface language to be able to make settings, select exercises, etc.

The Russian word ЗДРАВСТВУЙТЕ is the polite greeting form.

The Rosetta Stone method is based on pictures. It teaches to think in a new language from the very beginning. Vivid images in real-life contexts convey meanings of Russian words and phrases. Rosetta Stone describes this method as Dynamic Immersion®. Students hear words and sentences in Russian, see them written and associate them with pictures. By getting immediate feedback, users know at once if they understood the meaning properly. The program begins by introducing single words and simple phrases gradually progressing to sentences, dialogs and complex structures. Each lesson builds on what has been taught previously, so one learns Russian naturally, step-by-step without much effort.

Rosetta Stone Course Russian: How it is made 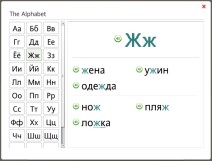 Beginners, who are not familiar with the Russian alphabet, can learn it separately. One can access the alphabet any time using the Help menu. It is possible to click on each Russian letter to master the pronunciation.

To profit from Rosetta Stone speech recognition it is recommended to use a properly set up microphone headset. It is necessary to allow Adobe Flash Player to access the microphone.

PRONUNCIATION (about 10 minutes)
This activity focuses on training the Russian pronunciation. Students repeat words and phrases after native Russian speakers imitating them. This helps develop the correct pronunciation in Russian.

Examples of excises for mastering the Russian pronunciation:

It is very helpful that words are broken down in syllables which makes it possible to refine the pronunciation of particular sounds.

Students can also practice the pronunciation of a particular Russian word or phrase thoroughly comparing their speech pattern with that of the native speaker.

Rosetta Stone explains grammatical structures of the Russian language in a simple manner. There are various types of exercises. First, the structure is being visually presented. In the next step students must apply the rule and check if they understood the pattern.

Those who understood the rule will be able to choose the correct form of the verb.

With this activity, students learn not only single Russian words, but also phrases and complete sentences. Here, again, the real life pictures illustrate the meaning. A combination of reading and listening exercises makes it easy to remember and recall new Russian words and structures.

Students hear a word and associate it with an image.

After having learnt the vocabulary one can easily answer the question in Russian.

Activity to practice reading in Russian

This activity focuses on single Russian letters and syllables. Students learn to read in Russian and understand spoken language. It helps establish the connection between spoken and written Russian.

A Russian speaker says the complete word, and then the syllable that is going to be trained. After hearing the sound unit again, one shall be able to choose the right syllable from similar combinations of letters.

The task here is to recognize and choose the proper letter combination.

Activity to practice writing in Russian

This activity is important to get used to the Russian alphabet. This exercise helps correct small errors that might creep in. For example, students might not be aware of mispronouncing an ending of a word. But, when writing, one has to spell the words properly and would notice any discrepancy between spelling and sound. Rosetta Stone provides an on-screen Russian keyboard (the layout does not match the arrangement of keys on a typical Russian keyboard).

A Russian speaker dictates the word shown on the screen. The task is to write it out properly.

Listening to the Russian phrases and copying them also helps learn grammatical structures.

Practice Russian in a simulated conversation

At the end of each unit, students learn to use Russian in "real-life" situations. A series of pictures slide across the screen telling a story and presenting different characters. So one has the impression to actually talk to people in Russian. Students learn to ask appropriate questions and give responses.

The answer is already displayed on the screen. Once a student has formed the right question, it is pronounced by a native speaker. ("Do you speak Russian?" - "Yes, I speak Russian.")

Here one has to respond with the answer that fits the context. ("Where do you work?" - "I work in a hospital.")

Rosetta Stone Russian: After each activity the results are displayed on the screen

Learning Russian with Rosetta Stone is fun. One can easily get addicted to it and keep learning for hours. It’s because the method teaches the language through play. One has a feeling of discovering a new world. As students repeat Russian words and phrases again and again, there is no need spending extra time memorizing vocabulary. Sentence structure is gradually getting more complicated which allows learners to pick up Russian grammar slowly but surely. Carefully selected pictures convey the meaning not only of single words, but also of longer sentences. Beginners, who are not familiar with the Russian alphabet, might have difficulties matching written text and spoken words at first. It gets better with practice, though. To make the start easier, it might be a good idea to learn the Russian alphabet separately.
It is possible to learn Russian in a pleasant and easy way. But it is still necessary to keep at it. Only students who don’t give up even if it gets tough and practice on a regular basis will success at mastering the Russian language.

Coaching sessions led by native speakers of Russian allow to apply the material of the Rosetta Course and gain confidence by interacting with real people.

Special Apps for mobile devices encourage to keep practicing and accelerate the process of learning the Russian language. Especially helpful is the Rosetta Stone TOTALe Studio HD for iPad which can be synchronized with the computer. As the use of the Apps require a High-Speed Internet connection, it is not possible to use them, for example, on the plane or abroad.

Rosetta Stone is worth its money and an excellent way to learn Russian for everyone who can discipline themselves and stay motivated.