Before the collapse of the Soviet Union in 1991 Russia used to be the major of 15 republics and is therefore often used as a synonym for the USSR (Union of Soviet Socialist Republics). That is misleading, but understandable, as Russia not only covered three quarters of the former USSR, but also was its political, administrative and economic centre.

Together with other ex-Soviet Republics Russia established in December 1991 the Commonwealth of Independent States (CIS). The CIS-States are: Russia, Belarus, Ukraine, Moldova, Azerbaijan, Armenia, Kazakstan, Kyrgyz Republic, Tajikistan, Turkmenistan and Uzbekistan. Georgia will quit the CIS in August 2009.

National Flag of the Russian Federation

National Emblem of the Russian Federation 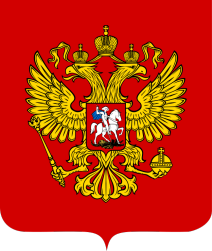 The Coat of Arms of Russian Federation

National anthem of the Russian Federation

143,347,059 (as of 2013). About 80% are Russians. The main ethnic minorities include Tartars, Ukrainians, Chuvash, Dag(h)estan, Bashkir, Byelorussians and Mordovians.
According to the official UN-Revision released in March 2007, the population in Russia will decline to 108 million by 2050. The main reasons of population decrease in Russia are high death rates (also due to the further spread of HIV/AIDS) as well as falling birth rates.

Christianity (mostly Russian Orthodox), Islam. However, about 60% of the population are reported to be atheists.

Presidential Republic. The President is elected every six years by a direct vote. The President is also being the Supreme Commander of the Armed Forces.
President of Russia since 2012:
Vladimir Putin (russisch: Владимир Путин)

Russia stretches over about 17 million sq km. It is situated in Eastern Europe and Northern Asia. The traditional boundary between the both continents being the Ural Mountains which extend for about 2000 km (1250 miles) form North to South. Russia can be divided into three main regions: European mainland (from the Baltic und Black See in the West to the Ural Mountains in the East), Siberia (from the Ural Mountains to the Pacific Ocean and from the Arctic Ocean to central Kazakhstan, China and Mongolia) and the Russian Far East.
In Russia there are nine time zones: GMT (Greenwich Mean Time) +1 to +11 hours

Russia stretches over different climate zones. In most parts of the country the climate is continental with a long cold winter and a shot warm or hot summer. Siberia is the coldest region with temperatures from -20°C to -34°C (-4°F to -29°F). Sometimes the temperature even drops to -68° С (-90°F). Along the Black See coast the climate is subtropical. The European mainland is situated somewhere in-between. The average temperature in Moscow, for example, ranges from -16°С to -9°С (3°F to 16°F) in January and from 13°С to 23°С (55°F to 73°F) in July.