Party Around the Clock 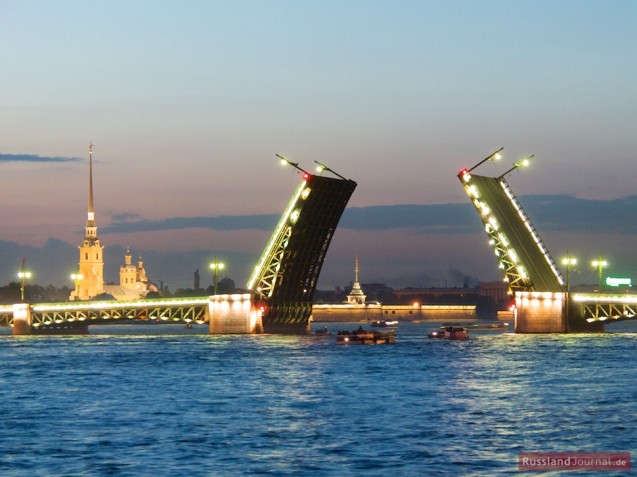 Those who experience St. Petersburg during the White Nights period run the risk of falling in love with the Venice of the North forever. A mighty wizard seems to let the sky behind golden church roofs glow in stunning red and aureate colors. A magic light permeates the city of Russian czars to everyone’s amazement.

From the end of Mai till the beginning of July the sun doesn’t really go down so that the twilight lasts longer. The day has an average of 19 hours and the longest White Night falls on June 21/22.

The phenomenon of White Nights occurs not only in St. Petersburg, but also in other regions around 60 degrees North latitude. In Russian towns Murmansk or Petrozavodsk it doesn’t get completely dark for eight weeks. One can also enjoy this spectacle in Canada, Alaska, Greenland, Norway, Sweden, Finland, Iceland and Germany (Island of Sylt).

But St. Petersburg is especially popular for its White Nights, and for good reason. The magnificent city of Russian czars offers a unique setting for this fascinating play of colors. It would be such a shame to sleep. People party, dance, sing, laugh and drink. Many come together at the bank of the Neva River popping champagne corks.

Lovers will never forget a boat tour along the Neva River and its branches. There are landing stages in front of the Winter Palace, at the Anitchkov Bridge over the Fontanka River and behind the Church of the Resurrection, where the Griboyedov Canal meets the River Moika. Boats call at almost all places where Nevsky Prospect crosses the water. The price for a private ride is open to negotiation and shall be fixed before the trip. An hour costs about 65 US-Dollars.

Year for year residents and tourists are looking forward to a special show: weddings at the bridges of the Neva River. In St. Petersburg, drawbridges raise between 1.30 a.m. and 5 a.m. at night to let big ships pass. Night view of the drawn and illuminated Palace Bridge is one of the most popular photo spots. The south bank of the Neva River offers the best view of the bridge. The bridge raises at 1.35 a.m. and at 3.10 a.m. (the schedule is slightly different every year). During the navigation period from April to November 13 of 300 bridges in St. Petersburg are drawn at night.

Every year from the middle of Mai to the middle of July the famous Mariinsky Theater in St. Petersburg hosts the International Stars of the White Nights Festival.

It doesn’t matter if you enjoy the performance of an opera star or a street musician, if you take a ride on the Neva River or stroll along the streets of St. Petersburg – you will never forget the magic of the White Nights.