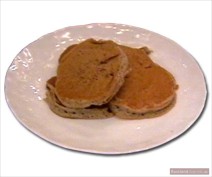 These cooking instructions are based on the comments given by Gary Robins, the Chef Executive of the Russian Tea Room in New York. Watch the video for exact instructions.

These blintz are in their structure actually more oladi. Real blintz are very thin, like crepes. At the Russian Tea Room oladi - smaller and thicker pancakes - are served with caviar.

TIP: In Russia blintz and oladi are often served with sour cream.

Recipe for Russian pancakes with lots of pictures:
Blintz dough and two fillings