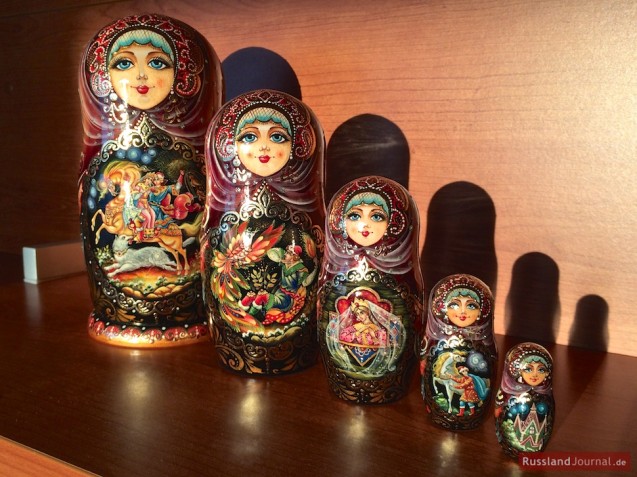 Matryoshka (also known as Babushka) is a famous Russian nesting doll. In Russian the doll is called 'матрёшка' and is sometimes also spelled Matroshka. It is a popular souvenir and is associated with Russia as well as balalaika, samovar or vodka. That is why Matryoshka is generally believed to have an age-long history. A mistake! Matryoshka is only about one hundred years young.

It is not quite clear when and where exactly the doll was born. It seems to be a mixture between a traditional Slavic painted egg and a Japanese deity. Russian craftsmen used to carve and paint wooden eggs for centuries. The eggs were hollow inside so that smaller eggs could be stored in bigger ones. In Japan there was a funny doll representing a jolly and wise deity Fukurokuju with an unusually high forehead. He belonged to the group of seven deities called Shichi-fuku-jin (the seven-who-bring-luck).

The legend says that at the end of the 19th century a Russian painter Sergey Malyutin got hold of both creations. He made a sketch of a doll and asked a wood turner Vasiliy Zvyozdotchkin to shape it. Then Malyutin painted the doll and gave birth to a sweet country girl wearing Russian national costume and a headscarf. She had a black cock in her arms. Seven siblings were hidden inside the doll. Boys and girls came in turns out of their sister until finally a baby appeared. The toy was meant for kids and should demonstrate the idea of fertileness, motherhood and family in a simple way.

The name wasn’t chosen by accident. At that time Matryona (lovingly Matryosha, Matryoshenka) was a very popular and common Russian name for a woman. Also, the word was derived from the Latin "mater" (mother) which perfectly suited for the purpose of the toy.

First Matryoshka dolls were manufactured in Moscow and were quite expensive. But after the World’s Fair in Paris in 1900 the whole world started admiring the sweet Russian country girl. The production was moved to Sergiyev Posad, an old monastery town near Moscow. A couple of years later basically everyone in Sergiyev Posad was busy carving or painting Matryoshkas. To meet the growing demand, other towns round Moscow also started producing wooden dolls: Semyonov, Polkhov-Maidan, Tver, Vyatka, etc. 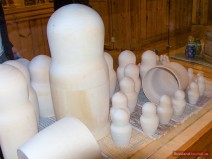 Today most Matryoshkas are still hand-made. The choice of wood is especially important. Linden and birch are considered to be best woods for Matryoshkas. The smallest doll is usually made first. Sometimes it is smaller than a finger nail. The next doll is adjusted to the smallest one. And so the work goes on until the set is complete. Than a painter provides the doll with a character and a fancy outfit. A traditional Russian Matryoshka has big black eyes, red cheeks and a friendly smile. She wears a national Russian costume, holds flowers in her hands and a basket of fruit or bread under her arm. 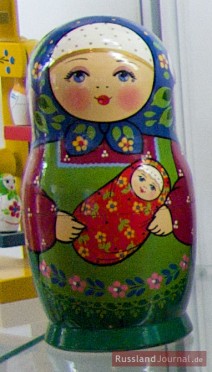 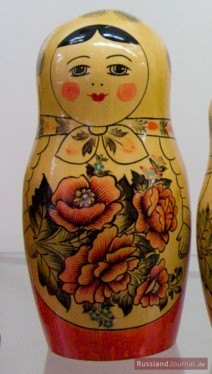 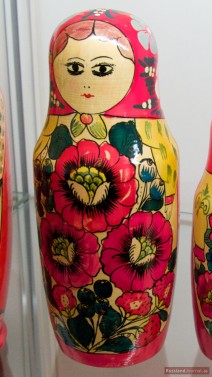 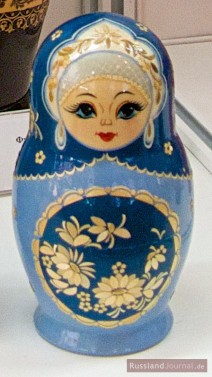 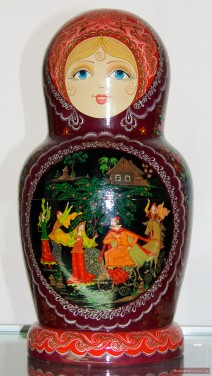 There is a wide variety of Matryoshka dolls. Royal families, republics of the former USSR, Russian and international politicians, poets, actors, literary figures singers and sportsmen have already lent their looks to Matryoshkas. Sometimes companies imprint their logos on Matryoshkas using the dolls as promotional giveaways. An original idea could be, for example, making a wedding invitation in form of Matryoshka with the dolls representing bride and groom. 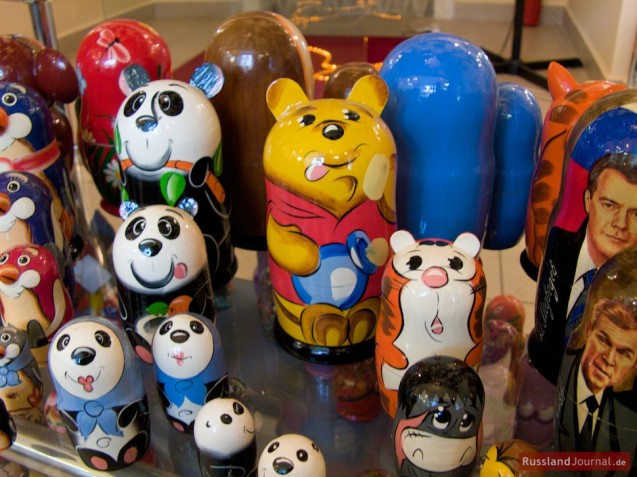 Most Matryoshkas consist of five dolls. But there are also some consisting of three, seven, ten or fifteen pieces. The biggest Matryohska family has 72 members. 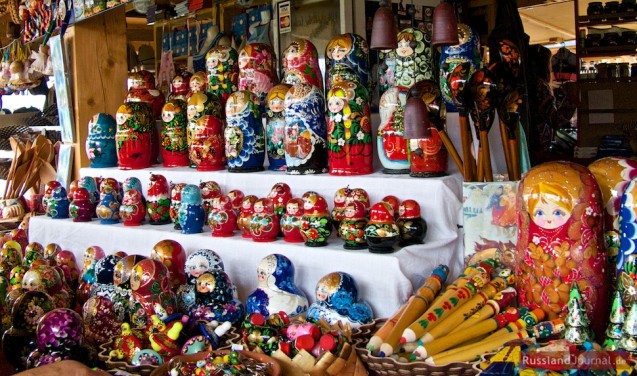 The Matryoshka Museum was situated the center of Moscow in the building that used to be a manufacture and a store called "Detskoye Vospitaniye" (Children’s Upbringing). First Russian wooden dolls were made here. Unfortunately, in Summer 2013 the Ministry for Culture of the Russian Federation ordered to close the museum. The article with a lot of pictures and a video shows the unique exhibition of the former Matryoshka Museum in Moscow (in German)